Our new member interview is with Postdoc Diana Spiegelberg from Uppsala University. 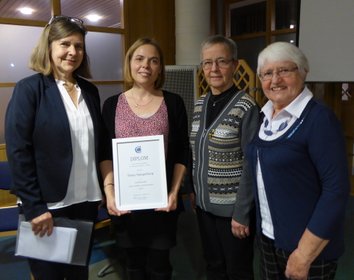 Why did you choose to work in radiation research?

Radiation and its uses has defined much of the 20th century, even though it is a young field of research. It is easy to forget that radiation was discovered just some hundred years ago - I have always been amazed by the great discoveries and researchers who birthed the field like Marie and Pierre Curie. That one scientific phenomenon has given us horrible destructive capacity in nuclear weapons – but also almost endless energy reserves by Atomic power and biomedical uses like radiation therapy and disease diagnostics is utterly fascinating. Even though much has been discovered so far, there remains many great scientific questions to answer - radiation will continue to save lives in the future, and I am excited to be part of that.

How do you see your career developing after having worked in radiation research?

The great thing about radiation research is that there is a wide variety of career choices. PhDs with experience from the radiation field are sought after by the nuclear industry, regulatory agencies as well as the medical sector. I personally find science rewarding as career choice, and see myself continuing with my current line of research. I was recently honoured to accept the Lions price in cancer research 2018, which will allow me to do just that.

What is the purpose of your research?

My research aims to improve diagnostics and treatment of cancer by the application of guided radionuclides. Developing better and more personalized treatment regimens will be key in taking the next steps forward in cancer treatment and management.

How do you see the future of radiation research?

The application of radiation for the benefit om mankind will remain highly relevant in the 21st century, and research to further optimize its uses as well. Hopefully, the current stigma associated with radiation in the mind of the general public can be worked against by education and outreach – and there we researchers have a very important role to play.

What are the challenges?

Radiation has sadly become a bogeyman for the general public, especially in the modern environmental movement. For each mutant X-man, glowing cartoon barrel of radioactive waste and nuclear disaster movie the public image of radiation is altered negatively. The challenge is to explain that radiation is a force to respect – but also a force that we can use and control with incredible exactness and skill, to be used for the betterment of mankind. This image problem can only be changed by us experts in radiation science, through outreach and education initiatives.

Is there a problem with the homepage? Please contact our webmaster